Posted by Reasonable Judaism at 10:44 AM No comments:

Email ThisBlogThis!Share to TwitterShare to FacebookShare to Pinterest
Posted by Reasonable Judaism at 10:42 AM No comments:

A Symposium on "Love they Neighbor as Thyself"

The Jewish Times has published an article about "Love thy Neighbor," a symposium I participated in last Sunday in Baltimore, MD.  It was great being back in Pikesville, where I have such fond memories as an Assistant Rabbi at Chizuk Amuno Congregation.  This time I was with my friend, colleague and m'sader kiddushin, Rabbi Steve Schwartz of Beth El Congregation.  As always, Torah study made for a wonderful day.  Click here for the article about the event. 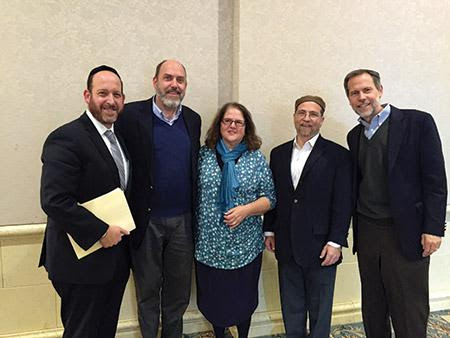 Posted by Reasonable Judaism at 4:04 PM No comments:

Go on a Journey - Parshat Lekh Lekha and the Election

The Following Message will be Published in the Golda Och Academy this week:


As we all turn from the national election to the future in America, we realize that we are on a sudden and unexpected journey.  How can the Torah help us to find our way?

In this week’s parshah, lekh-lekha, God tells Avram that it is time to leave the land of his birth, his father’s house, and go to a land that He will show him, and that He will bless him.  It must have seemed like an impossible journey, yet he goes with no complaint.

Why did Avram go?  God commands him two ways.

First, Lekh lekha, “Go for you.” Avram needed to face the unknown, and to remove himself from an environment of idolatry in order to achieve his own potential. When he is true to his own beliefs and actions he will be transformed and fulfilled, though the journey may be difficult and the challenges seem insurmountable.  Avram will face threat against his family in Egypt, a hostage crisis with his nephew, war with his neighbors, family turmoil between Sarah and Hagar, and the proposed sacrifice of his son Isaac. His life is not promised to be easy, but if he follows his faith, it will be meaningful and impactful.

Second, he is promised that God will make of him a great nation and that he will be a blessing.  Avram, the individual will be renamed Avraham, “The Avram of a multitude.”  By being Avraham, a socially and politically engaged individual, he can help set his family, his people, and his nation on the right path.

So each of us must find our path.  It must be grounded in faith, hope and commitment to our highest ideals. And we must be willing to face and engage the challenges and tests in a complex and often difficult world.  We must be involved in the society and the politics of our age, while protecting our families and neighbors in dignity. We must be our best selves, for the many.

Lekhu Lakhem, Go on your journey and be a blessing.
Posted by Reasonable Judaism at 6:26 AM No comments:

An Affirmation of Democracy

In the day following the most startling election since Truman-Dewey, America has had much to think about.  I would like to reflect briefly on the import of the moment, and the path forward for all of us.

For Clinton supporters who saw the election as a referendum on pluralism, globalism and (most importantly) women's dignity, the surprise loss shatters not just political ideals but wounds a sense of identity and security. The loss is personal and devastating in a way most elections are not.  How can healing be afforded in the presence of such a loss, when the cause of the loss stands to hold such power? It is frightening, frustrating or even maddening.

For Trump supporters prior to victory, they often felt ridiculed or degraded. There were called racists and bigots. In NJ, where they were a minority, the affirmation of national victory is sweet.  How can someone surprised by sudden validation have compassion for those who are so pained by the very same result?
First, I believe that this is a natural part of the fabric of American culture.  There have been rapid and unprecedented changes in liberal social norms in the country over the past decade and, much like the stock market, it is not surprising that a “correction” might occur. Social change takes time, and it comes with forward, backwards, and sideways developments.  That process is understandable, no matter our individual views in the moment. I believe the historic trends towards social liberalism will continue, but not unabated. Those who wish to advance and protect that trend will now need to work hard again as if the gains of the past 50 years had not occurred. Those who think those developments are not positive, will now have the opportunity to influence policy in a way they have not had in many years. But the arc of History is forward.
Second, as both Secretary Clinton and President Obama have said in their own ways, this is an affirmation of the democratic process.  The change in policy and vision between Obama and Trump will be dramatic, to be sure.  But in most countries such a shift would come from violence or oppression.  Here, it occurred on a peaceful election day, unmarred by intimidation or injustice. Those who came to vote were counted, and the result is just. As Americans, the obligation is to support or oppose the President as a participating citizen. It is a noble and important role, whether your party is in power, or you are the loyal opposition. Just as those who said Obama was not their president were wrong, so those who say Trump is not their president are wrong. The election was decided by people who got off the couch, went out of their homes, and did something.  The future will be decided the same way.
Third, the Jewish People are divided.  Know that in a typical election 2/3 of the Jews vote Democratic and 1/3 vote Republican.  In this election, due to the issues of civil rights, immigration and others, it seems more like 75% to 20%, with 5% choosing other options.  But that is 1/5th of our people voting for Trump and 3/4's of our people in the category of loss at this time.  How do we care for everyone?  We have significant internal differences regarding social norms, family structures, economic policy, national security, immigration, how best to support Israel, and what our relationships with other people and religions should be. These differences are as deep as those we saw in this election campaign. Yet they do not destroy us.
The answer is community.  Week after week we join together in synagogue for Shabbat, holidays, Torah study or fellowship.  We accept our differences, sometimes teasing and laughing, sometimes ardently engaging the topics, and sometimes politely avoiding them. We have a common bond, and noble ideals in our religion that we share.  And these core beliefs define us not as people who are right and wrong, but as a people who holds many paths to truth and justice and experience of God.Our variety as a people is part of our integrity and our strength, and it is called upon today – whether you “won” or “lost” in the election.

The other answer is activism.  Now is the time to commit to engagement in our synagogue community, our local community and our nation as participating citizens. These are the places where America is experienced and you can have the most profound impact. We are all united by a common commitment to civil liberties and tikkun olam - justice for all and care for the disadvantaged among us. Think globally, and act locally together.
In common love of America, I wish you well, I hope to see you in shul.
Rabbi Robert L. Tobin
Posted by Reasonable Judaism at 6:47 PM No comments:

While most of the time the President, Senate and House are not all of the same party, Trump, Obama, Bush 43, Clinton, Carter, Johnson, JFK, Truman and FDR all had at least one congress that was entirely aligned with them. Those with more than one congressional term aligned with them were Carter, Johnson, Truman and FDR. With the exception of Carter, legislative agendas and government initiatives under the other 3 were broad sweeping and shaped the future of America. Everything from the WPA and Social Security to the Civil Rights Act owe their origins to one party government.


As Trump assembles his team, he will not only have to put together the executive branch and appoint the vacancies in the judicial branch, he will negotiate with the new Congress who the leadership will be in the house and senate. Paul Ryan is clearly dead in the water as Speaker of the House. This new congressional leadership will be the key to Trump's effectiveness as a president and to the range of impact that his policies will have. If history is a judge, he will need not only this congress, but the next one as well, to achieve his most dramatic goals and objectives.


From www.wiredpen.com here is the historical chart of political party control of the Presidency, Senate and House:


Sources:
Senate, House, Janda, InfoPlease, Wikipedia
[1] There were 50 Ds and 50 Rs until May 24, 2001, when Sen. James Jeffords (R-VT) switched to Independent status, effective June 6, 2001; he announced that he would caucus with the Democrats, giving the Democrats a one-seat advantage.
[2] Two Independents (Lieberman-CT and Sanders-VT). Lieberman was reelected in 2006 as an independent candidate and became an Independent Democrat;  Sanders was elected in 2006 as an Independent.
[3] Two Independents (Lieberman-CT and Sanders-VT);  Arlen Specter (PA) was reelected in 2004 as a  Republican and became a Democrat on April 30, 2009.
[4] House data (3 vacancies); Senate independents caucus with Democrats
[5] As of October 20, 2016, there was one vacancy (only 434 members)
Posted by Reasonable Judaism at 8:23 AM No comments: