The New U.S. Embassy in Jerusalem (See the map)

Yesterday marked to formal move of the embassy of the United States of America in Israel to Jerusalem.  It was a day full of pomp and celebration by supporters of Israel and Israelis together. While the Palestinian Nakba protests continued, a peaceful and joyous commemoration of the new building was taking place in Jerusalem itself.

Yes, Jerusalem is the capital of the State of Israel, and has been for over a half a century.  This is where Israel's government sits, and does the business of running the country.

The controversy is based on historic opposition to the existence of the State of Israel at all.  The 1948 armistice line, called the Green Line from old military maps, marked the division between Jordan and Israel until 1967. In the Six Day war that year, Israel conquered everything from Tel Aviv to the Jordan River in that region.  The Oslo Accords returned local governance of non security issues in certain Palestinian areas, including areas to the East of Jerusalem, where Palestinian majorities are pervasive. The final resolution of Jerusalem and its status as capital of Israel and or a Palestinian State was left for last level negotiations.  Since then, Israel needed to build a separation barrier on the eastern side of the city for security purposes, and the peace process has broken down.  Yet the continual governance of the united city of Jerusalem has continued unabated, and well.

Moving the embassy was delayed for many administrations to avoid "picking sides" in the final status of the City.  But that is ridiculous.  Should the U.S. put an embassy in an area whose "final status" is in Israel, then it is the embassy in Israel.  Should that embassy wind up in a State of Palestine, then it will be the embassy in Palestine.  Should it be determined (never) that Jerusalem becomes the United Nations original pipe dream of an International City, then - mazal tov - you have a consulate for the United Nations there.  Putting a U.S. embassy building down in Jerusalem changes nothing, except it refuses to cater to the delusion that Israel is not real and permanent.  Good negotiations begin with facts, truth and clarity.  Opening the embassy does that.

Now, what IS interesting is the piece of land chosen by the U.S. While it has not been covered by the media, the embassy straddles the Green Line.  The west side is on the Israeli side of the green line and the east side is on the old Jordanian side of the green line.  Theoretically the building can accept people from either side, without controversy.  Cynics however will say that it declares Israeli sovereignty by ignoring that it is building "across the green line," in part on "occupied territory." 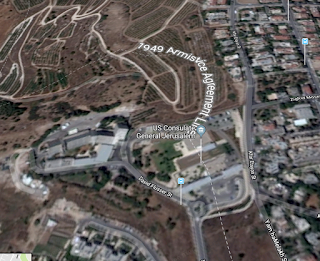 Personally, I like the choice, as it makes the situation clear and declares that the United States is in the middle of it for ever.

In the meantime, television coverage continues to focus on the Hamas inspired "suicide by cop" protests on the Gaza border.  There, hundreds of people at a time are attacking the border fences, trying to enter Israel for violent purposes.  What nation in the world would not protect a border from such invasion, and with live fire if necessary?  If thousands of people along the Mexican or Canadian border started launching fire bombs into American fields, planting bombs along the border fences, and tried en masse to breach the fences in an organized attack, wouldn't the ICE border control agents have to use their weapons?  Wouldn't they use tear gas first, which issuing clear warnings?  Wouldn't they use fans to blow away smoke for clear view? Wouldn't they fire warning shots?  Wouldn't they have to defend the territorial integrity of the U.S. with live fire if none of that worked?  They rules aren't different just because it's Israel.

The Palestinian cause needs to return to the negotiating table.  This bloodshed is their plan, and their purpose.  Israel must hold fast, even as it loses the publicity war to protect its people.


Posted by Reasonable Judaism at 6:39 AM No comments:

Posted on:
Friday May 11, 2018
In response to Iranian rocket attacks against Israel late Wednesday night, the Rabbinical Assembly released the following statement:
Wednesday, Iranian forces fired some 20 rockets at the Golan Heights, marking the first time the regime has directly attacked Israel from Syria. Thankfully, the Iron Dome missile defense system was able to intercept a number of the rockets, and no Israelis were hurt in the attack. In response, Israel attacked multiple Iranian and Syrian military sites early Thursday morning.
We echo the calls of world leaders in condemning Iranian aggression and attacks on Israel. Israel has every right, and an obligation to its citizens, to defend itself against such Iranian provocations.
While we commend the Israeli military for its bravery in protecting the people of Israel, we pray for an immediate de-escalation of violence and the safety of all people.
Posted by Reasonable Judaism at 10:55 AM No comments:

AJC statement on US Withdrawal from the Iran Nuclean Agreement

When the JCPOA was first announced on July 14, 2015, AJC took three weeks to study the agreement, meet with a range of high-level American, European, and Middle Eastern officials, and engage in a thorough internal discussion. This was undertaken against a backdrop of nearly two decades of AJC’s focus on the growing Iran threat, and countless discussions from Beijing to Berlin, from Tokyo to Paris, from New Delhi to Brussels, from Washington to the UN, and well beyond.

In the end, we concluded that we could not support the deal, as we feared its flaws – no binding provisions on ballistic missile development, no focus on Iran’s destabilizing regional behavior, weaknesses in the coverage of the inspections regime, and a dangerous sunset clause – would ultimately define it.

Moreover, the fact that the deal was never submitted to the U.S. Senate and that not one Republican senator voiced support, coupled with weak public approval according to various national surveys, almost ensured that once Republicans came to power the JCPOA would be in danger.

In addition, despite repeated Obama Administration predictions, which we ourselves heard more than once, that the JCPOA would moderate Iranian behavior and lead to greater focus on domestic growth and development, Tehran has expanded its regional aggression, repeatedly flexed its military muscle, continued its calls for Israel’s annihilation and “Death to America,” and flaunted its expanding missile program.

And Israel’s remarkable intelligence coup in Iran further underscored the longstanding Iranian pattern of deceit, deception, and disinformation, and served as an additional warning to the international community about the true intentions of Iran’s leadership.

President Donald J. Trump never hid his disdain for the JCPOA or his threat to withdraw the United States from it. But he also left open the possibility that, if our European allies, would be willing to address seriously the core weaknesses, then there was an alternative to “nixing” the deal. Regrettably, however, despite efforts on both sides of the Atlantic, full agreement on a path forward has to date eluded the Americans and Europeans.

That is profoundly regrettable. Despite our many reservations, we had nonetheless hoped to see the deal “fixed,” not “nixed,” at this stage of the game.

We can only hope that today’s action by the President, significant as it is, will not end the effort to find common ground. The last thing anyone should want is a wedge driven between the U.S. and our European partners, as Iran would inevitably become an unintended beneficiary. And given Iran’s current and future threats to regional and global security, that should be an outcome no one in the U.S. or Europe wants.
https://www.ajc.org/news/ajc-statement-on-president-trumps-decision-to-withdraw-from-iran-nuclear-deal
Posted by Reasonable Judaism at 12:32 PM No comments: