Ignoring the Truth About Hate Crimes, and Scapegoating Muslims

Here is a very interesting and important statement from MPAC, the primary lobbying organization in Washington on behalf of the American Muslim community:

I have found the work of MPAC in recent years to be credible, important, and well grounded in common American constitutional values.
It raises a very troubling issue, covered in some of the press, that the current administration has formally and as a matter of government policy equated violent extremism with Islam, to the exclusion of other forms of violent extremism.
In America most violent acts of hate are racial, according to the FBI's annual Uniform Crime Report, Hate Crimes publication. That said, within then religious hate crime category, the most common form is anti-Semitic in nature, perpetrated by non-Muslims against Jews.

See Hate Crime. (2010, July 15). Retrieved December 11, 2017, from https://ucr.fbi.gov/hate-crime/
If we want to make America safe from hate crimes, we must not exaggerate a single and convenient scape goat for political advantage. We must look at the actual facts and patterns of real violence, and organize government policy accordingly.
Posted by Reasonable Judaism at 6:36 AM No comments:

According to multiple news outlets, President Trump will announce tomorrow that the United States officially and formally recognizes Jerusalem as the capital of the State of Israel and that he will begin the process of moving the embassy there. President Trump has been clear that he is not committed to a two state solution, and that makes the move enormously symbolic in the eyes of Palestinians and their supporters.  Not surprisingly, the Muslim world and Palestinian Authority President Abbas have uniformly condemned the idea, and threatened Israel and the United States with the specter of violence and conflict in response.    A peaceful political move is immediately opposed with threats of violence. I believe that this is one of those moments where you see everyone's true colors.

The truth is, as a matter of established and objective fact, Jerusalem is the capital of the Modern State of Israel.

The parliament meets there.  The prime minister lives there.  The government's offices are there. The law of the land has established itself there. The people of the democratic nation of Israel overwhelmingly support it. By every measure of objective and subjective fact, Jerusalem is a modern thriving city functioning in every way as the capital of the State of Israel.

President Trump is not creating a new reality, he is describing an existing reality.  As a statement of truth, no matter whether you love or hate Israel, Jerusalem simply is the capital of the country.

Now, there are those in the Palestinian side of the conflict who reject this idea. There is no basis in law, history, or pragmatism to deny Jerusalem as the capital of Israel.  Even the divided city of 1948 had a Jewish Quarter. Even since 1949, the Kenneset has met in the New City outside the old city's walls. Even before Israel conquered the entire city after Arab attack in 1967, and unified it under Israeli rule, Jewish self government already took place there.  If you recognize Israel, you recognize Jerusalem. 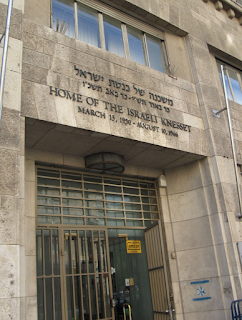 And there's the rub.  The only ones who have a logical argument to deny Jerusalem as the actual capital of Israel, are those who deny Israel itself.

But that is not what they are shouting for.  They are shouting against the Israeli Jerusalem, not for a Palestinian one.  Listen closely, and realize that it is the fact of Israel's existence that is the essence of their grievance.  Given that stance, forgive Israel if they moved ahead with peaceful living, legitimate sovereignty and independence while hoping for peace one day.

Do not fall prey to the argument of "provocation" that would blame anti-Israeli and anti-U.S. violence on us for making this move.  The abuser always seeks to blame the victim.  Let's be clear: anyone who responds to peaceful politics - like building an embassy - with violence is a terrorist.  Watch them show their true colors.  That is not to say that there is no validity to Palestinian grievance or aspiration.  Surely there is. But intifada is always the answer, instead of peace.

Now, as for moving the United States embassy to Jerusalem, that should not happen.  No, the argument against moving the embassy is that it would be a tremendous waste of taxpayer dollars. The embassy in Tel Aviv is a huge structure, employing hundreds of people. It also houses a tremendous secure infrastructure for not just diplomatic, but military, intelligence and economic interests and agencies.  There is no need to replace or duplicate that structure at the expense of hundreds of millions of dollars just to make a symbolic point in support of Israel.  We don't need it, and we shouldn't build it, because it is not in our own best interests.

Yes, Jerusalem is the capital of Israel.  No, that is not anything new. And no, that does not preclude a future with Palestinian dignity and independence, or even with their own capital of Jerusalem. But Mr. President, do not waste my money by dragging the embassy and all its contents and activities to Talpiot.  We have better things to spend our money on.

Posted by Reasonable Judaism at 9:42 PM No comments: