Getting it All Right - "I Told You So"

It is not often that I say "I told you so," but the amount of hype around this election during the mundane process of counting ballots has been ridiculous.  The election is roughly panning out exactly as predicted, and following major trends that were already in place last February.  When all is said and done, the Biden electoral college map will be largely unremarkable to historians, despite the rancor on the right.

1)    My post on February 28, when all the candidates were in play, correctly predicted the consolidation of the Democratic Party behind Joe Biden as the best centrist candidate to defeat President Trump.

2)  My post on March 23 correctly analyzed the Wisconsin race, and in exactly which counties and districts the victory over Trump would have to take place.

3) My post on April 2 correctly theorized that Ohio would go Republican and lose, putting Ohio on the losing side for a Republican for the first time since 1960 and JFK.

4) My post on October 12 correctly stated that we would know on Wednesday morning after the election if Joe had won in any of AZ, FL, GA or NC and that we would therefore know that he had won the election.  We had results from AZ Wed that held up comfortably all week.

5) My post on October 19 correctly pointed out that the polling had missed, and was missing again, the extent of the Trump electorate - both existing supporters and first time voters that would arise.

6) My post on Monday, November 2 drilled deeper down into the likely delay in PA and set the safe margin of victory for Biden at 50,000 votes.  When the counting is done it looks like he will be almost exactly at that point, or a little above.

Here is the map that I published a week before the election: 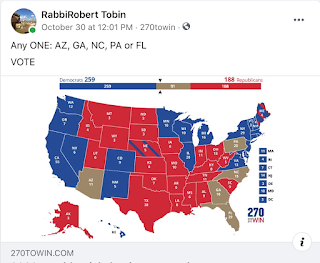 So no, I have not been panicking and I have not been agitated this week.  It is sad to see all of the insanity out there, but for those of you who have been following me for the past year on this topic, it has been nice to have you with me on the bus of calm and peaceful democracy.

Enjoy the counting as the obvious slowly is accepted by the rest of the world, day by day.  All in all, a pretty boring and predictable election.

Posted by Reasonable Judaism at 9:08 AM