Today is Day 3 of our whirlwind.  Today we travel to Lod and Abu Gosh, both "mixed" cities in Israel with Jewish and Arab communities in large numbers.  This was was the day I was looking forward to from the beginning.  Let me explain why.

As you may know, the scariest thing for most Israelis about the 11 days of open warfare between Israel and Hamas was the rioting that happened inside the mixed cities of Israel proper, like Acco, Lod, Yafo, Haifa and more.  The internal breakdown of civility marked a new event for Israelis of any religious or cultural background, and this new rift is the one that will ultimately determine if Israel is or is not the democracy that we believe it to be. We know how to deal with Hamas' rockets, no matter how traumatic and terrible that entire event was.  The ongoing conflict about what's beyond the 1967 borders is also known.   But the riots - Arab/Jewish or Jewish/Arab - looked like something that could linger, or (God forbid) grow.

Yet, in the 2 weeks since the cease fire, the unheard of finally happened: an Arab party openly joined a coalition to form a government and receive leadership roles.  Mansour Abbas' Islamicist Ra'am party decided that waiting for the West Bank or Gazan Palestinian leaders under the PA or Hamas to produce tangible benefits was no longer worth it.  Ra'am saw that they could topple Netanyahu, gain legitimate political authority and power, and secure massive financial allocations to the Arab population within Israel, so they made the leap.  A desperate Netanyahu had asked Ra'am to join him in a coalition to stay in power just before the war, so all Israel now knew that it was a "legitimate" choice for any other Israeli parties to make the same offer. They did, and the move blew up in Bibi's face. Ra'am joined the opposition in forming the "Government of Change."  This government will be formally sworn in this Sunday.

So this was the day I was waiting for.  I needed to understand why, not how, the riots happened within Israel.  And will it happen again?  Or is an Arab party in the government a ray of hope for Israeli Arabs - perhaps for Israeli democracy as a whole?  And will Arab and Jewish citizens ever be socially, financially and practically equal in Israeli society? 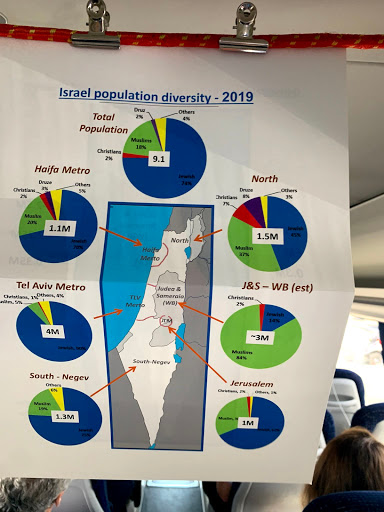 I draw your attention to a chart of Israel's demography.  Note that Jews are the majority in most places, and that Israel is an almost equally split society with Muslims and Christians in the North.  In the West Bank, of course, the story is the reverse.  And Gaza is not a part of the picture because it is outside of Israel or Israeli control completely.

So, with stunning questions, real fears, and a strange amount of hope, I boarded the bus for Lod.

Lod is in-between Tel Aviv and Jerusalem, and the town was meant to be an Arab enclave of the final two-state proposal in 1947, surrounded on 3 sides by the Jewish state. Like Ashkelon, which we visited on day one, it fell behind the Armistice line of 1949.  Palestinians who speak of the “1967 lines” have effectively accepted these areas as being a permanent part if Israel.

So, Lod does have its history of injustice and inequality.  During the War of Independence, Jews fled from Palestinian/Jordanian sovereignty.  Lod remained largely mixed before during and after the war.  And while most Palestinian refugees fled from the war, in the hope that the Arab states would quickly win,  many Palestinians were also forcibly removed from their homes and villages.  This was true in Lod, as clearly documented by Ari Shavit's My Promised Land, which is necessary reading for all.  I believe that there can never be full peace until the full stories of 1948 and 1967 are told, and they are coming out more and more.  Only truth can lead to reconciliation.  And we aren't there yet.

Yet since 1949, Lod has always been a mixed town with at least three communities, each socioeconomically different from the other.  There is a very large marginalized Arab community.  Education is poor. Employment is scarce. Drugs are rampant. And crime is terrible in that part of the community.  Those neighborhoods are not "mixed." There is also a small, economically self-sufficient Arab community that lives in the other areas - the nicer areas - of town.  And there is the Jewish community of seculars and modern Orthodox who live typical Israeli lives.   Their pre-riot belief was that the last two communities equally believed that a peaceful shared society exists already.  This is the presumption that we came to look at.

We met with a Jewish family who moved to Lod for the multicultural society.  They felt that their prior Jewish neighborhood was stifling and homogeneous.  They wanted to be part of the more complex and interesting Israel.  They moved to Lod, in part, for the Arabs. 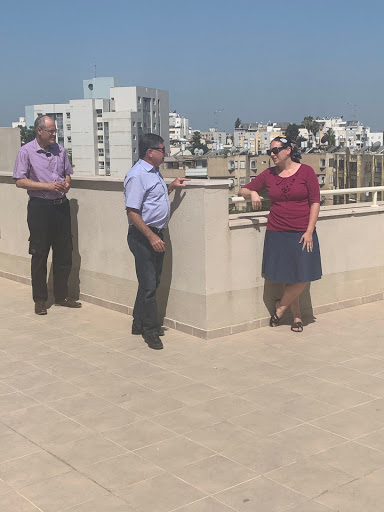 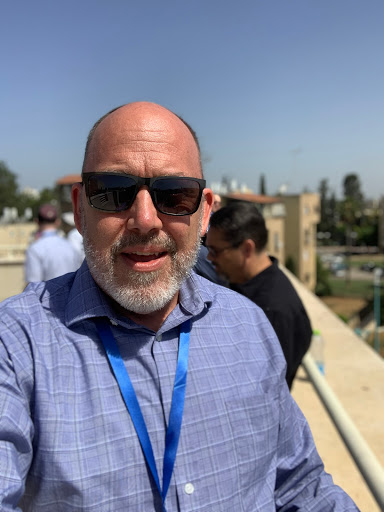 We met with a young Arab muslim, wearing western style clothing, who teaches in a Jewish school.  She moved out of the "bad" neighborhood to the "better" neighborhood for safety and for a better life for her and her kids.  She drives her children 45 minutes away from Lod every day to attend a school that teaches them in Arabic, but with a curriculum and quality of teaching that she knows is superior to what is available to them in the Arabic schools in Lod. 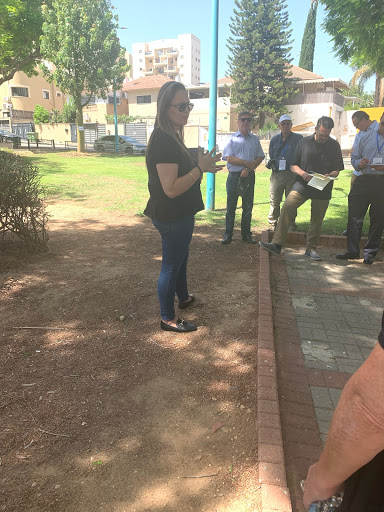 The two women, one Jewish and one Muslim, had very different experiences.  The Jewish couple had an aura of shock, even betrayal at what happened on their very street and in their neighborhood.  They showed us pictures of the "triangle of peace" where a church, mosque and synagogue had lived side by side for generations.  The synagogue was gutted by arson in the riot.  The church and mosque were not harmed.  What started with the Sheikh Jarah protests,  escalated with the temple mount conflicts, moved on to the Hamas rockets  and then came to this.  She asked herself if she was naive? Maybe, yet sincere as well, was my impression.

The Jewish couple spoke of  a time when a neighbor asked if they had come to turn the city Jewish.  They were shocked.  They had left the pure Jewish world to live differently.  But from viewpoint of the Arab in Lod, the reaction was an obvious one: outside Jews moving in are seen as a threat.  This is the backdrop for Sheikh Jarrah resonates with.

So it is not surprising that the Arab woman told us how it began with everyone gathering in peaceful solidarity for Sheikh Jarah in the last days of Ramadan.  The story of a Jewish group driving out a Palestinian family from an East Jerusalem neighborhood is powerful for Palestinians and resonates with them no matter where they live.  Even in Lod, where Israelis many believe the shared society is working, they have memories of other families who were driven away from Lod in 1948.  They also have a history of "collaborators" that were settled in Lod, unwelcome in other Palestinian areas.  They have the larger narrative of disadvantage and marginalization within Israeli society.  The woman spoke of trying to buy an apartment in the nice side of town, but being discriminated against by people not wanting to sell to an Arab.  She changed her name and her appearance to "pass" for Jewish, but when they met her husband - more visibly Arab than she - the meetings were cancelled and the deals were off.  Finally she met someone willing to sell and they bought.  "Isn't that illegal?" a member of the American group asked. "Yes." she said simply, with nervous and derisive laughter.

So we came to see the mixed society living peacefully, betrayed by violence and riots.  Both women joined a protest together against the violence.  Both women want the shared society.  But the starting points are very different.  There is, quite simply, gross inequity between them.

I was left wanting more.... but of course it would be ridiculous to expect that I would leave feeling satisfied.  No sane person should be satisfied today.  Not with Israeli Jews.  Not with Israeli Arabs.  Not with the Palestinians.  We are all in conflict inside ourselves, among our peers, and with those who oppose our dreams.  The conflict is real,  and ongoing, so we are all unsatisfied.

Talking with these two women, and trying for a moment to see the world through their eyes, it felt like looking at the universe through a keyhole.  I am not seeing enough. Yet what I do see is true.  And I realize, that is the basis of the misunderstandings about Israel here and in America.  People simply don't know enough, but are talking, yelling, protesting as if they did.

From Lod we went to Abu Gosh, another mixed town. We visited Hinam, an organization bringing together people of different backgrounds to live as groups in each other's communities for lengthy periods of time.  The idea is that you need to know someone, their family, town, food, background and everything in their system and environment before you can ever really know them.  At best it leads to the shared equitable society we all work and pray for.  At worst, if you have conflicts, at least you won't hate each other.  You will have a relationship.  Out of this idea, they have study sessions, community programs and more.... a beautiful idea.  Sadly, as we were there, large forest fires in the area were set by arsonists... and who knows yet why.  How fitting to be sitting in the wake of a war, talking about our hard work and hopes, while smoke and ash was in the air. 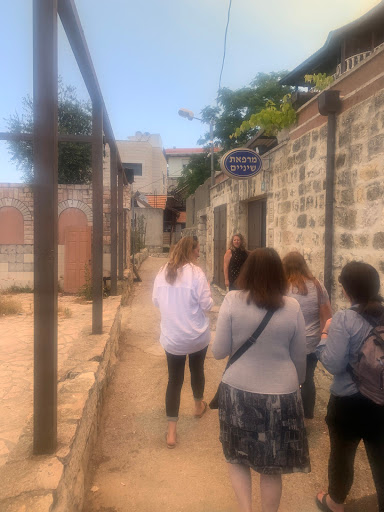 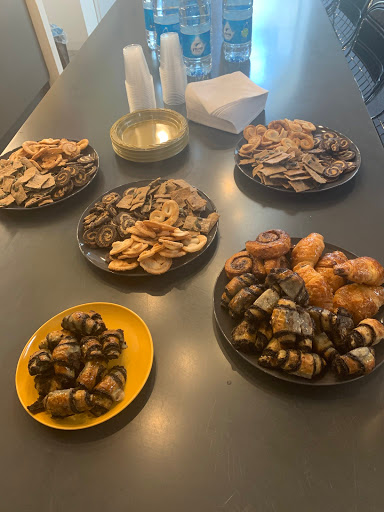 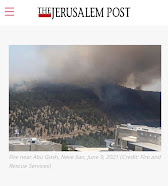 Another startling thing happened in the new government coalition.  The Labor party, down to only a handful of seats, has a Reform Rabbi seated in the Kenesset in the new government.  We don't know what portfolio MK Rabbi Gilad Kariv will yet have, but it should be something to do with diaspora affairs and/or Jewish identity.  What a welcome change from the Haredi parties of the last several coalitions who put extreme Orthodox voices in charge of those areas even as the relationship between American Jews and the State of Israel declined on identity topics.  We met with MK Rabbi Kariv in our hotel. 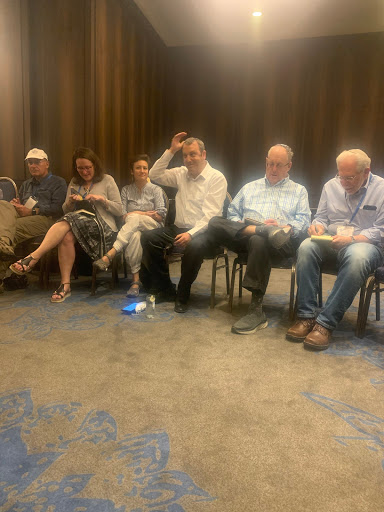 And then... well... dinner and off to the airport.  Home we go, with our minds and our hearts still reeling.  I will speak more about the lessons I learned and my hope for Israel this Shabbat morning, parshat Korach, in synagogue.  I hope you will join me. 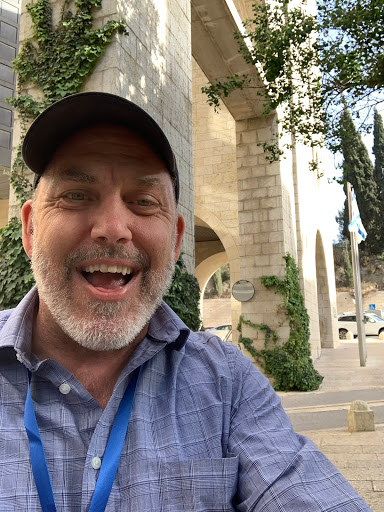 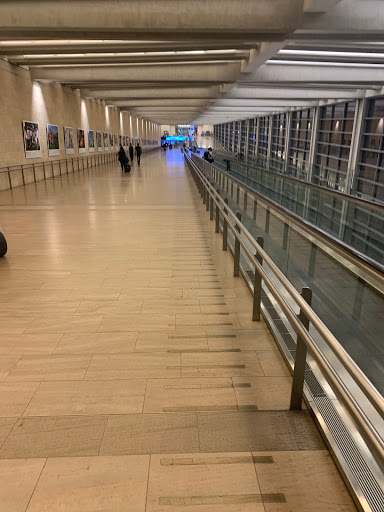 Goodbye Jerusalem - back to New Jersey.
Posted by Reasonable Judaism at 10:01 AM