Again, we are in the safest region of Israel today, but we were deeply saddened to hear that Chalutza, one of the tiny communities we were going to visit, took a direct hit from a Hamas missile this morning.  The JNF has an emergency campaign for them, as they have no shelters and no warning systems.  You can find out more at www.jnf.org - RT

We began the day at the national military cemetery, Har Hertzl. Here we gathered first at the burial place of the prime visionary of the Israeli State, Theodore Herzl.  Herzl knew that the Jewish future would never be safe in Europe, long before the Shoah struck down 6 million of our people.  And he spent his young life working and politicking for that goal. He died despondent, believing that he had failed, when in truth only 50 years later Ben Gurion would stand in Tel Aviv and declare the formation of the State of Israel in the Land of Israel. 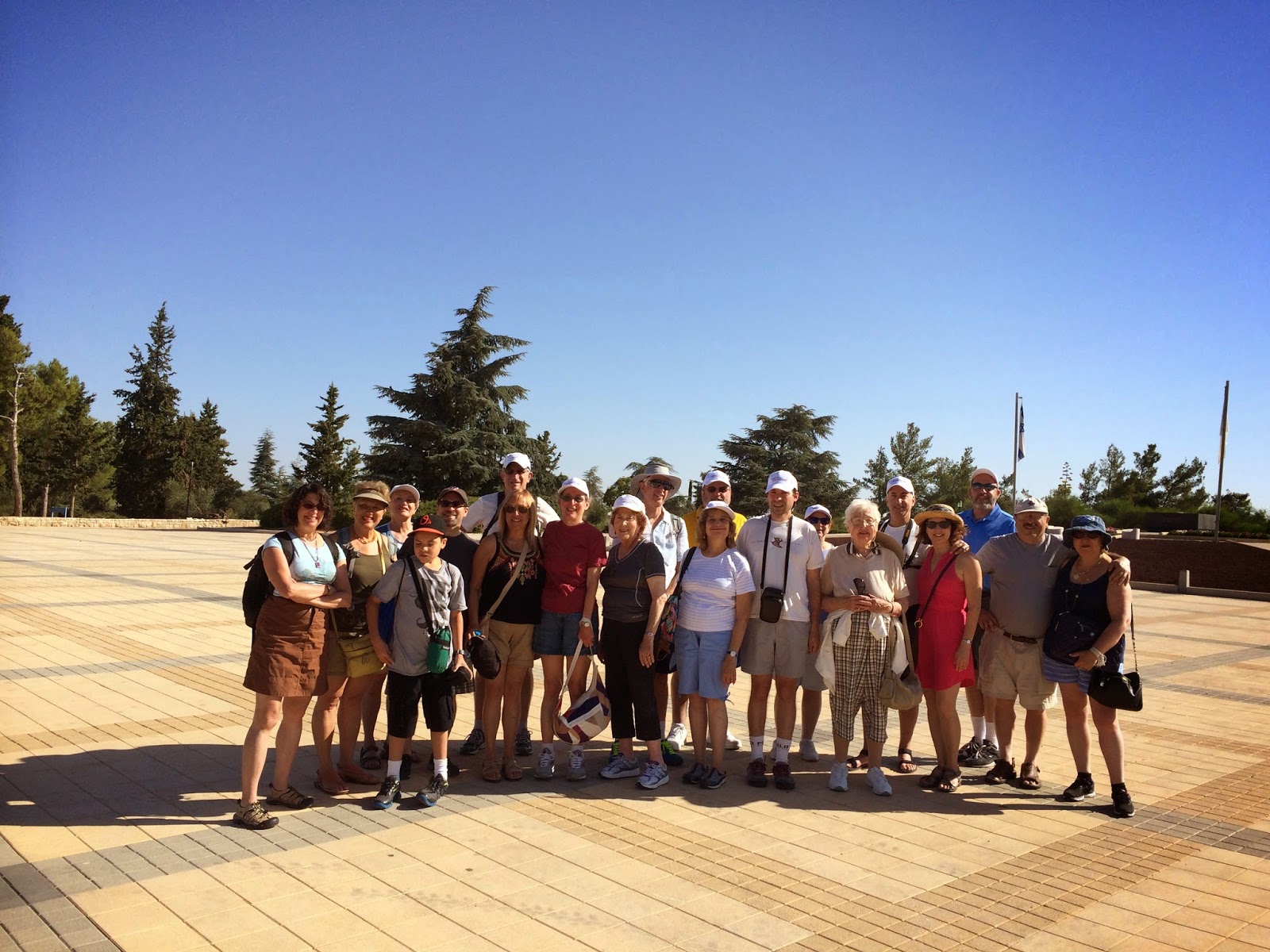 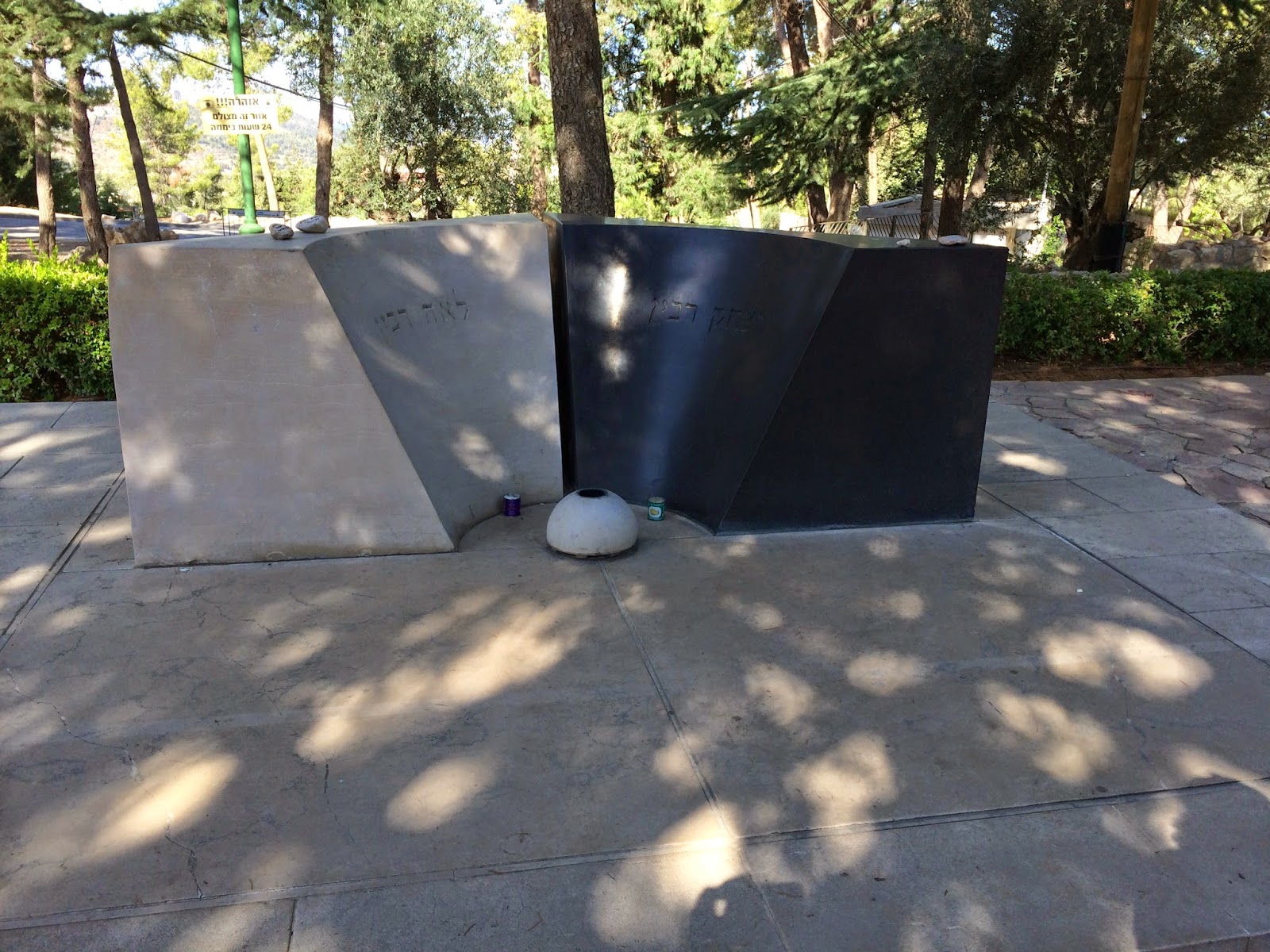 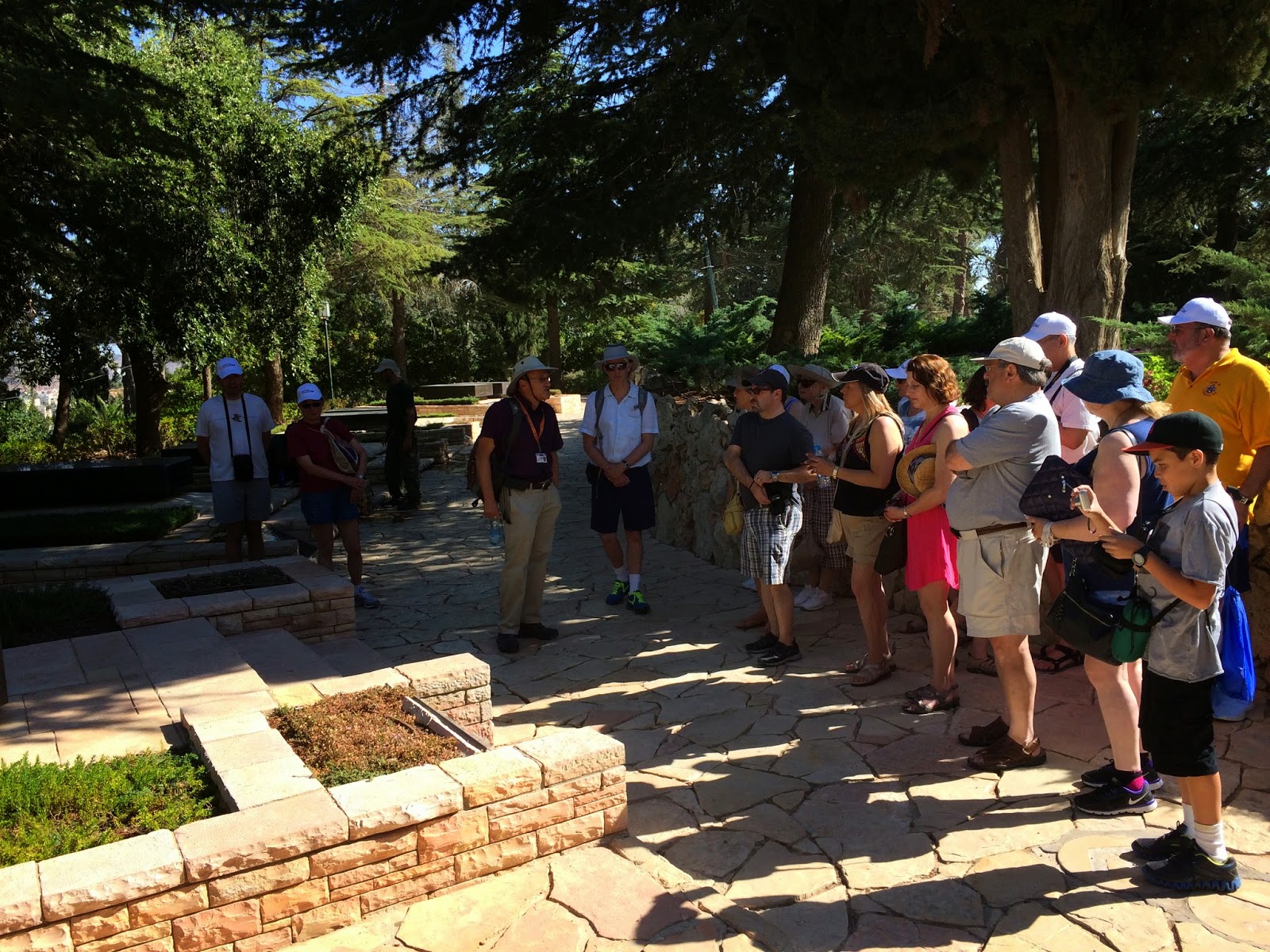 We paused as I chanted the El Malei Rachamim  in memory of Yitzhak Rabin, Golda Meir and all the soldiers laid to rest in this sacred cemetery.

Next we went to the site of one of the most important battles for Jerusalem during the 1967 war, Ammunition Hill.  Here, to the north of the old city, the Israeli forces needed to break though to Mt. Scopus to reinforce the Jews encircled there, and to control the roads to the north of the Old City for the eventual conquest of Jerusalem.  The stories of bravery portrayed there in trench warfare were remarkably documented in a film made possible by the JNF and the Ammunition Hill Society.  This is a must see for anyone who wishes to understand the battle for Jerusalem. 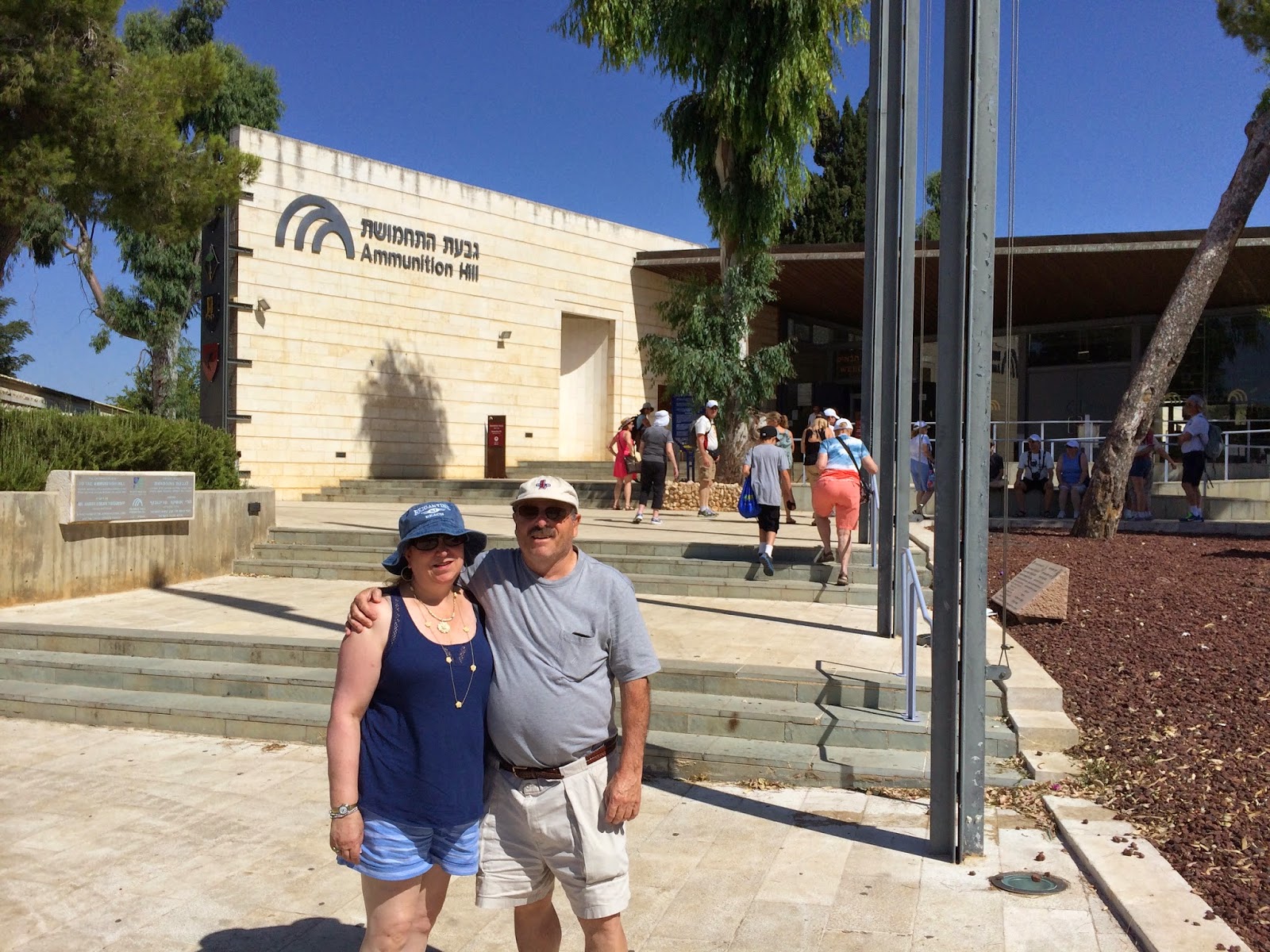 
A 3-d map of the battle of Jerusalem
comes alive in sight and sound
during the presentation in the visitor's center: 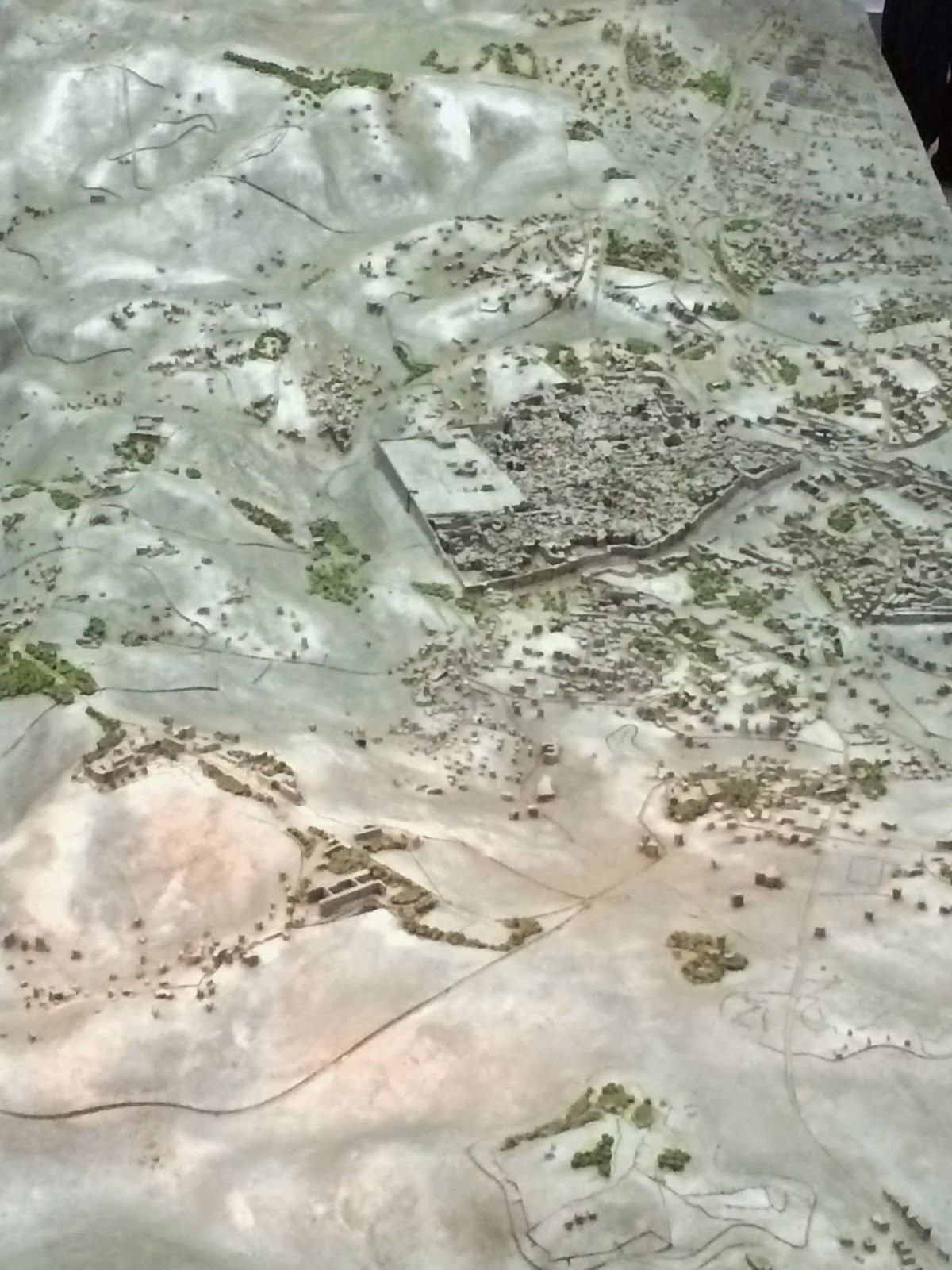 We then bid farewell to Jerusalem until "next year in Jerusalem!" We descended the road towards Jericho, seeing the Judean desert and its Beduin for the first time. Stark brown burnt hillsides begrudgingly let grown an occasional acacia tree in the runoff wadis as we drove. We spied a rare Ibex with its long horns. And eventually came to the Qumran community.  Here we wonder what other gems may be hiding in the desert waiting to be discovered, and guessed at the kinds of people that would find this isolation appealing.  The pluralism of Judaisms in the second temple period in many ways mirrors our own: Pharisees, Saducees, Essenes and Zealots... each convinced of their way, and facing history undaunted.  Of course the Pharisees had the form of Judaism that could survive the temple, and so our own history finds its link in the chain. 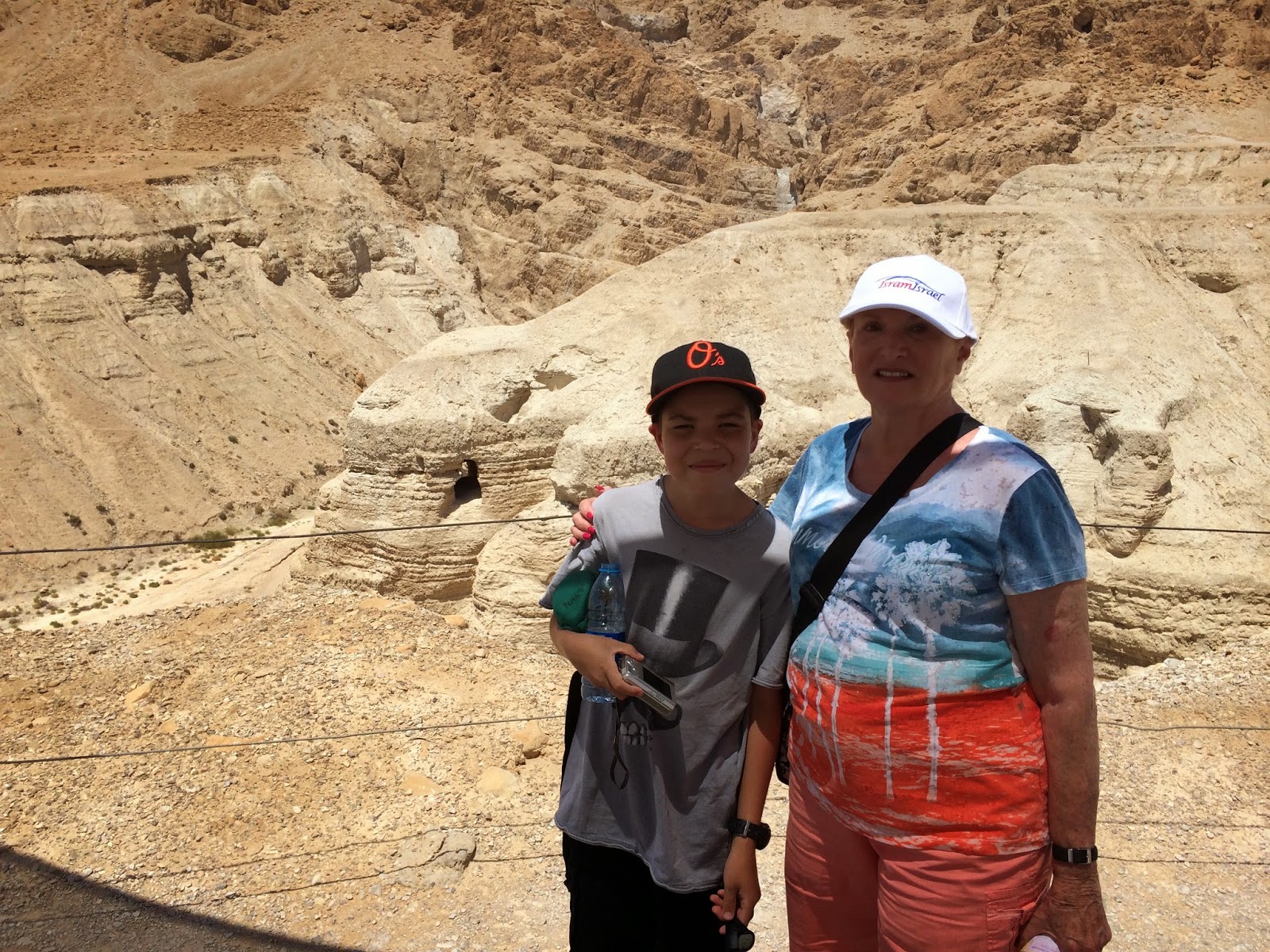 One of the Dead Sea Scroll caves in the background. 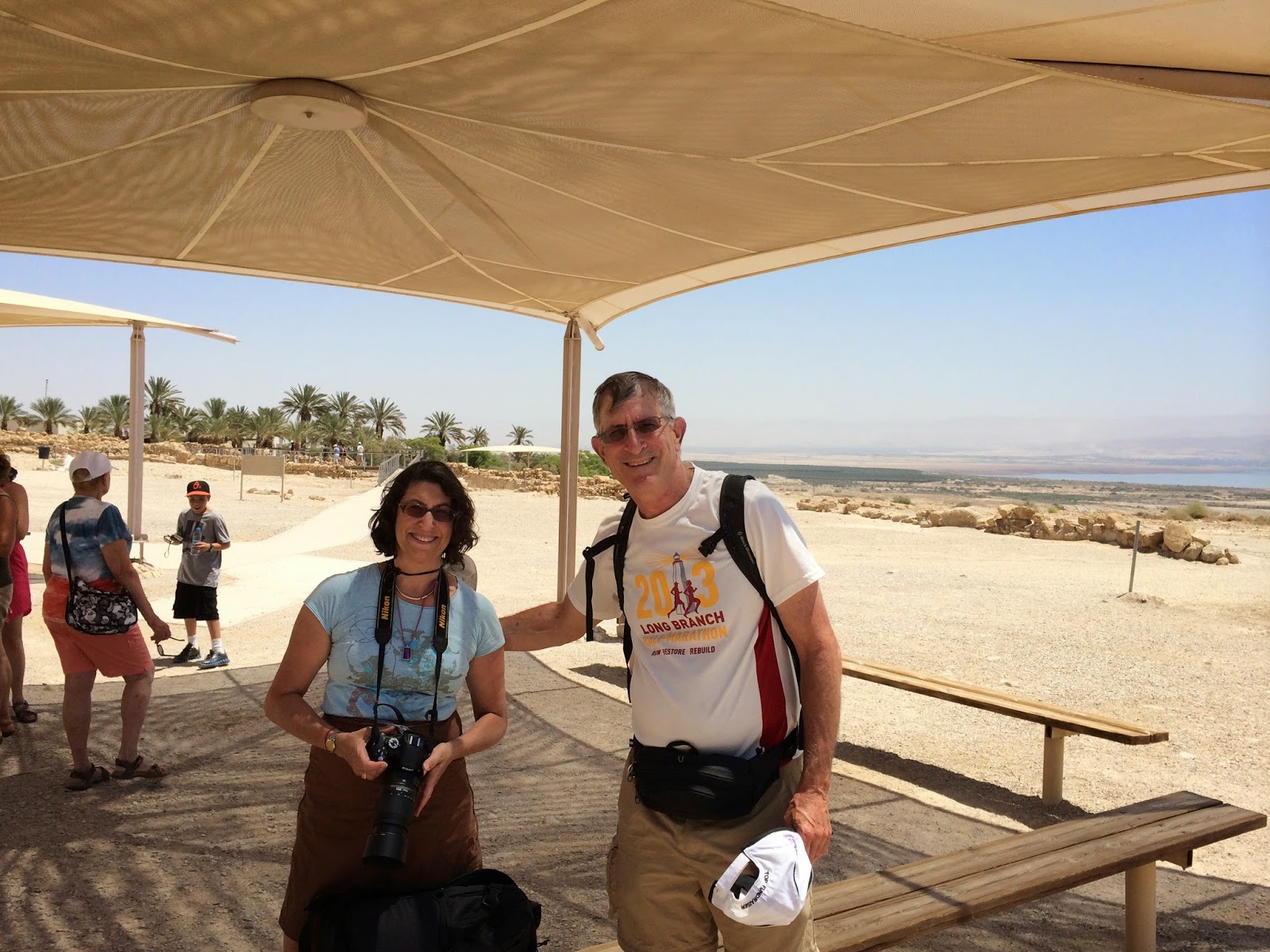 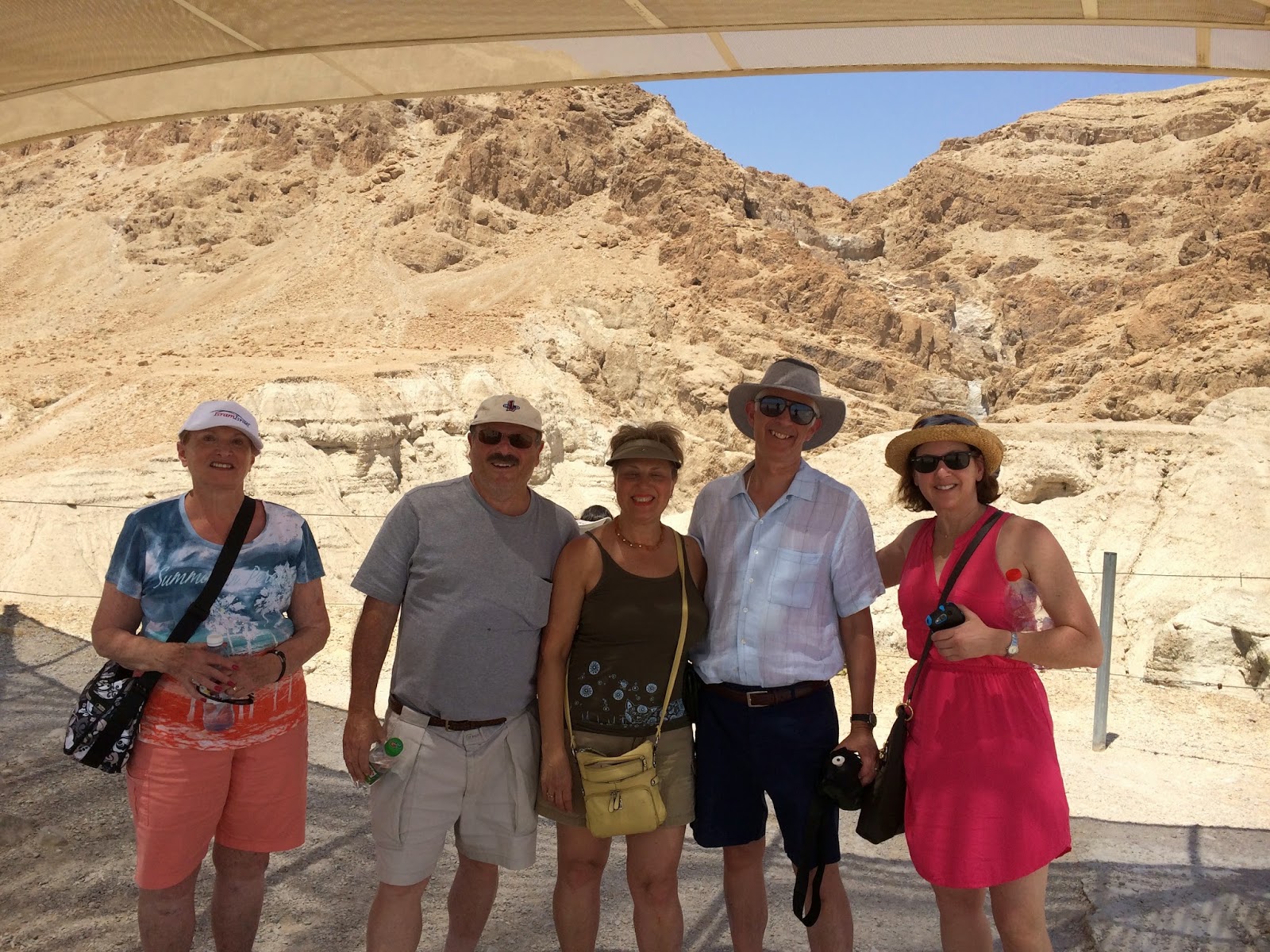 Here the survivors of the destruction of Jerusalem in 70 CE held the Romans at bay for another 3 years before their fateful end.  As the Romans built a new mountainside for their siege engines, those above lived off of large stores and cisterns filled with water.  When the cruel day came that Rome broke through the walls, a decision had to be made: slavery, or death? In one of the most provocative stories in Jewish history, the holdouts chose death at their own hands. 10 men were selected, and nearly every man woman and child was put to the sword.  One of the ten drew a lot and slew the remainders before taking his own life.  Rome was denied its ultimate victory, and the fierce desire for Jewish independence and freedom was given a striking story for the ages.

The architecture of Masada was originally a spectacular 3 tiered palace on the north face of the mountain with bath houses, store houses, minor palaces, cisterns, a synagogue and more up above. A visit here is a must for any traveler in the region. 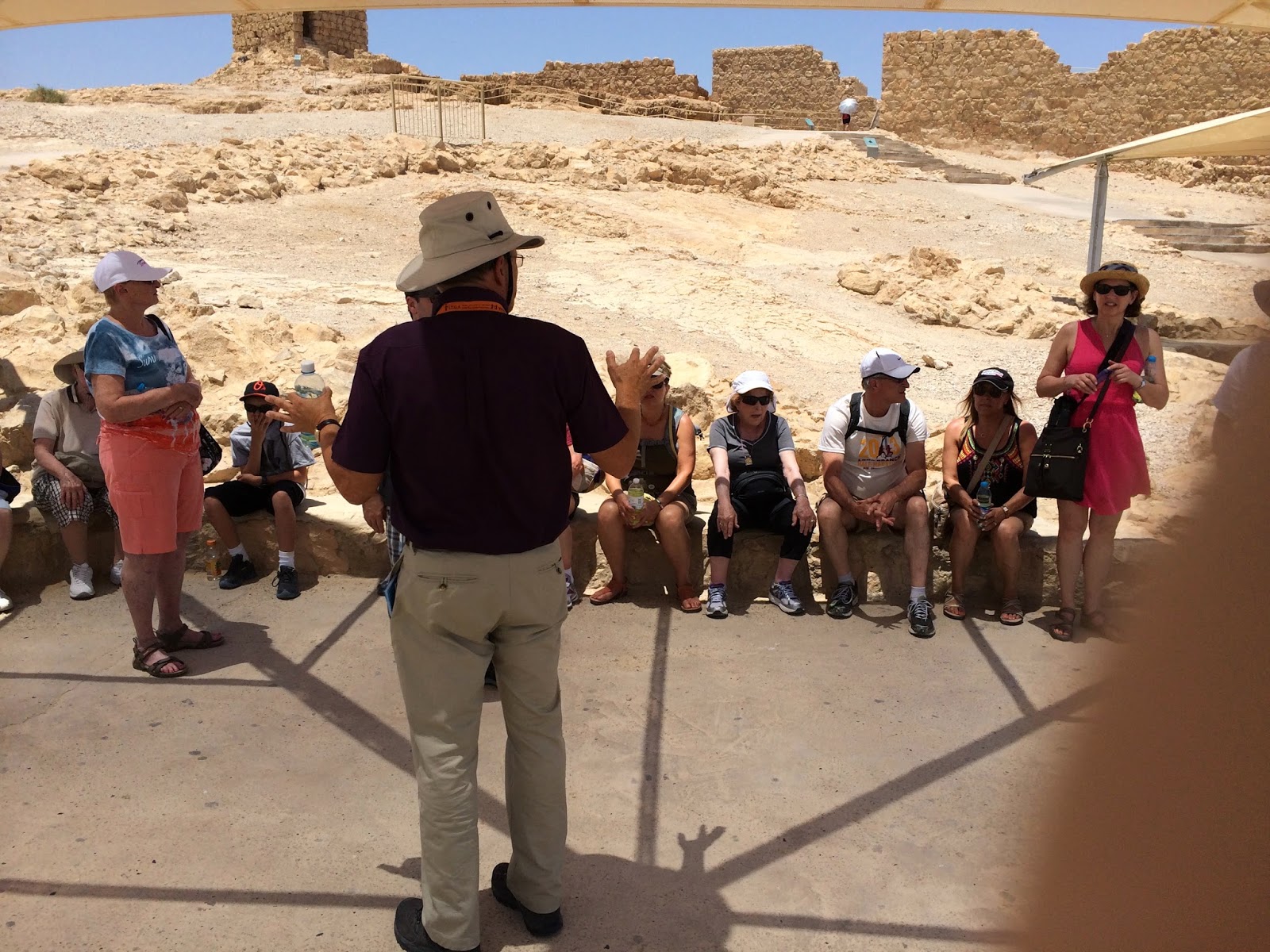 Mark Deckleberg from Isram Tours is an amazing guide. 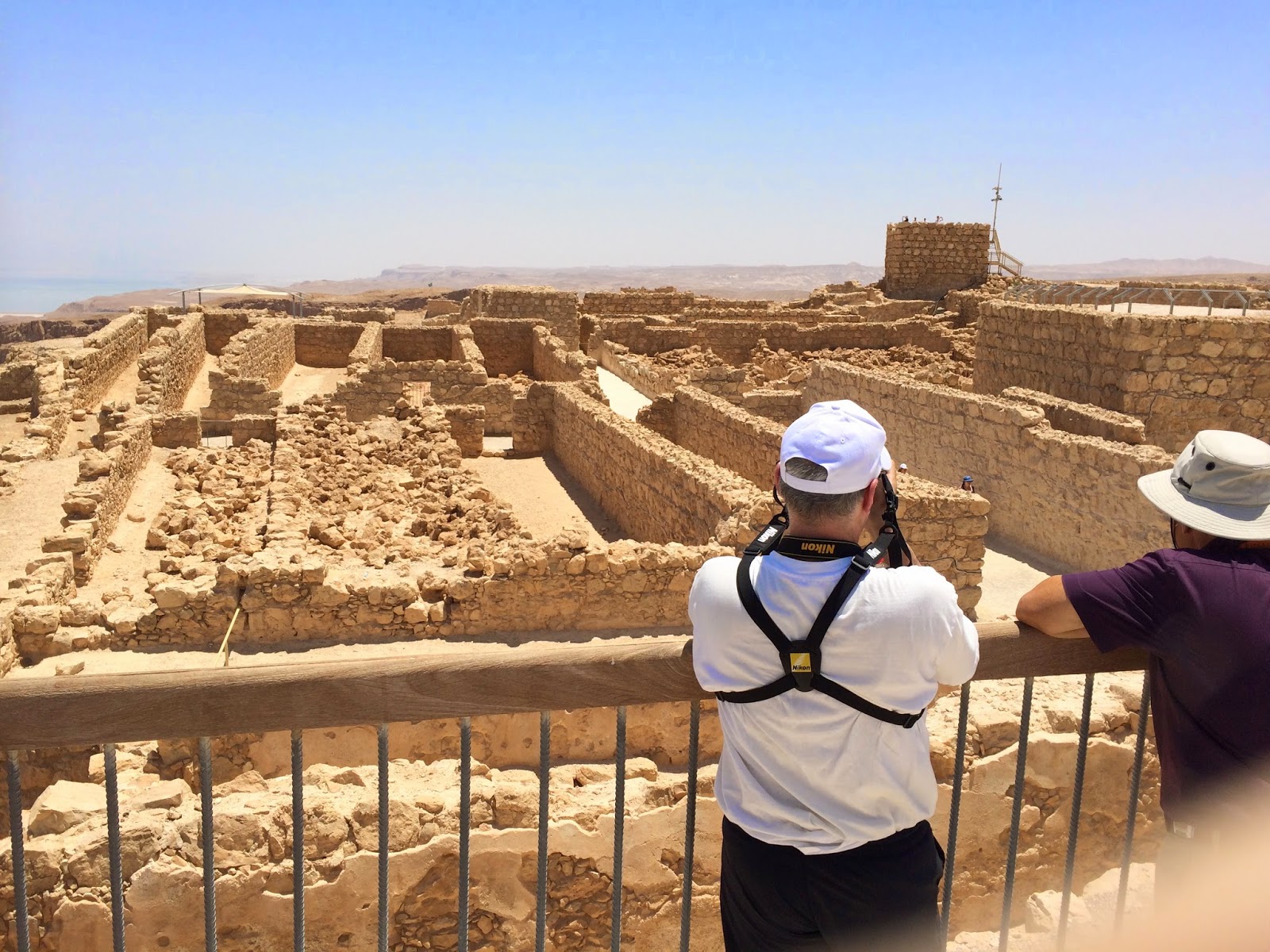 stones as discovered on the left, and reconstructions on the right. 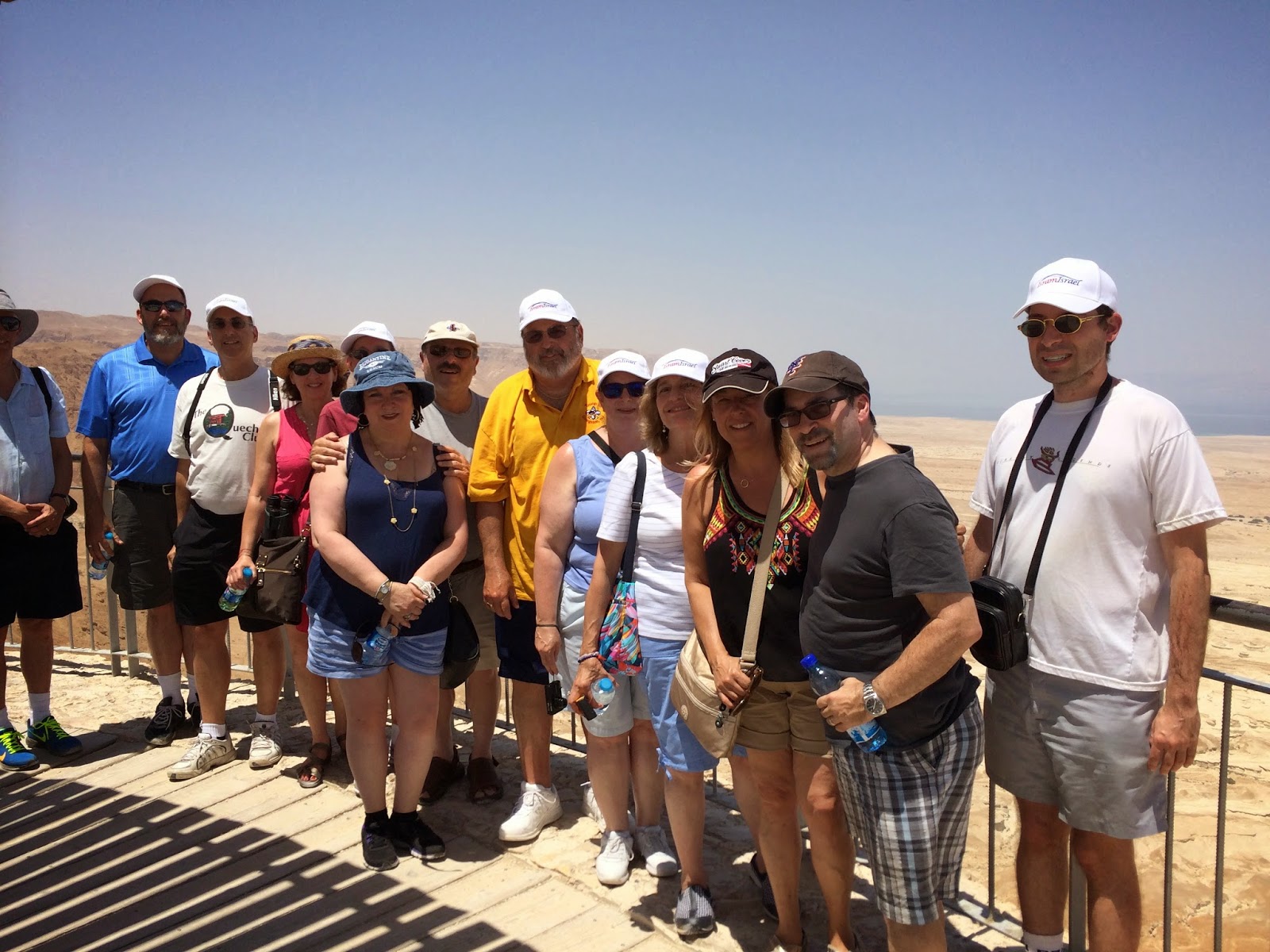 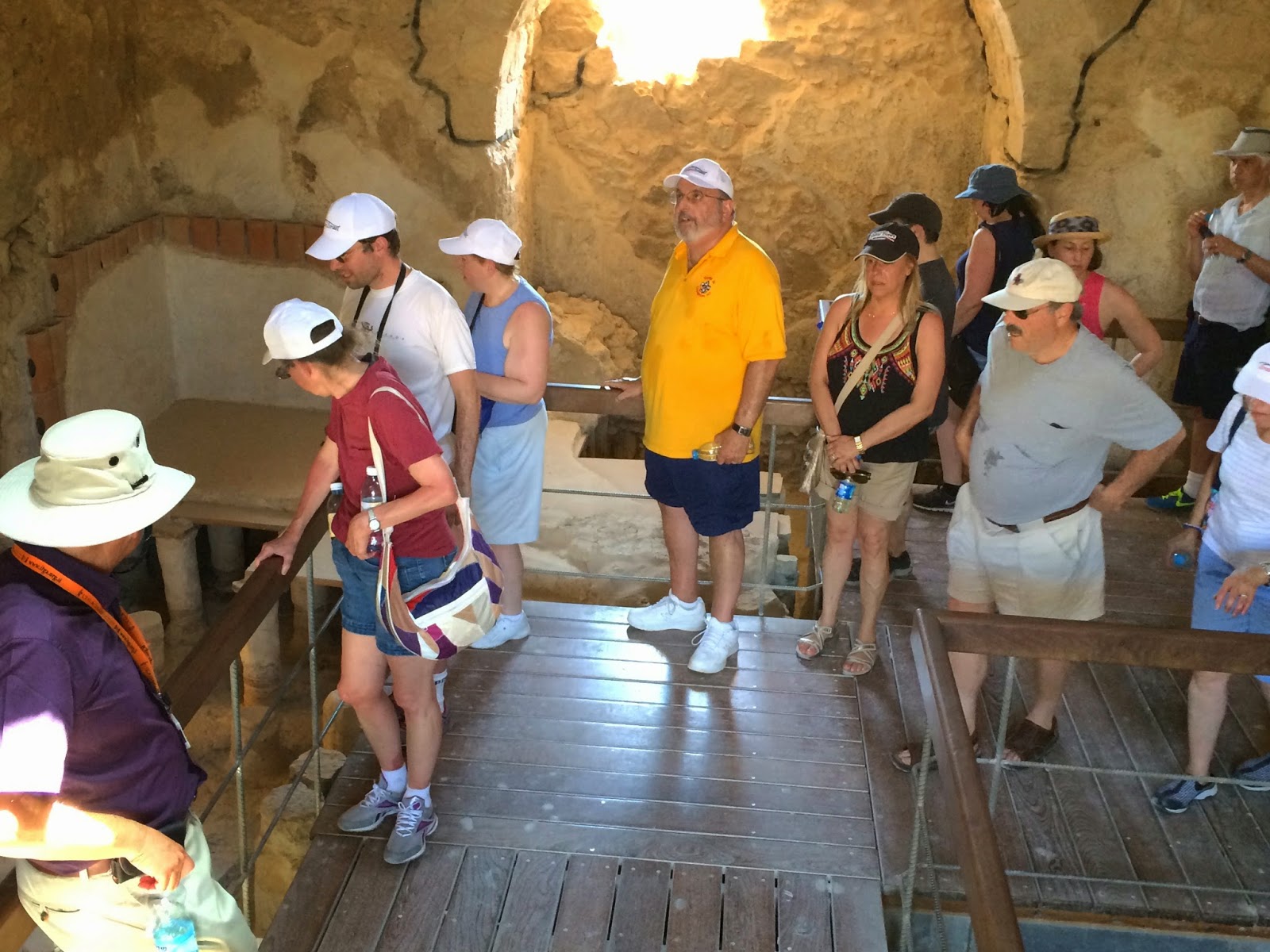 in the schvitz house.

Time for a break!

With so many stories of sacrifice for the protection of our people, we moved to the Dead Sea and our day of relaxation.  Everyone gave the dead sea a "float" and many enjoyed to pool or the other spa amenities.  Kick back, relax, and enjoy the sun setting over the Judean Hills. 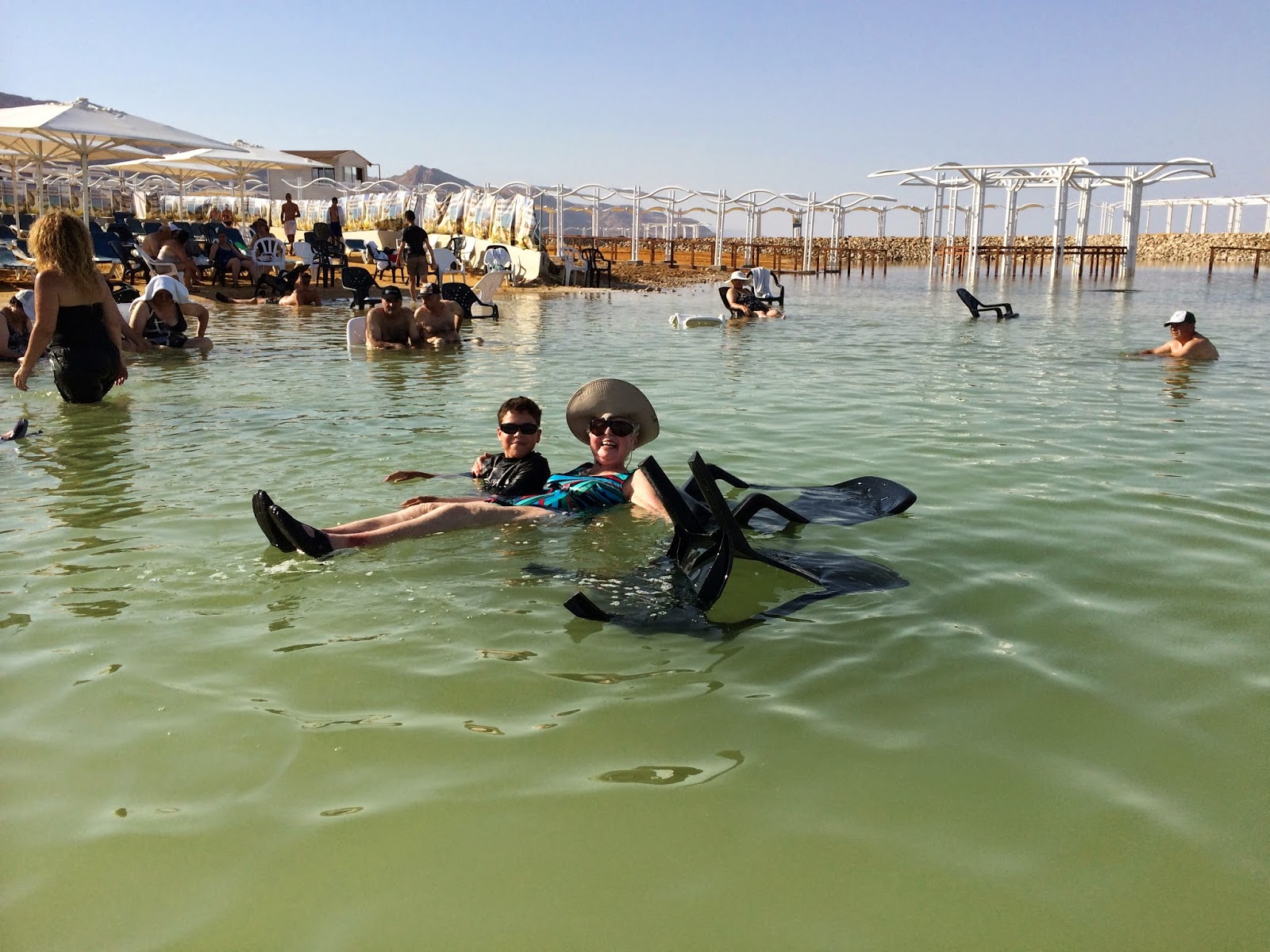 Phyllis Tolkowsky has been a real trooper as the self proclaimed "oldest member of the trip,"
even joking that she remembers when swimsuits were supposed to cover a lady's ankles!!
Not quite, and keep going Phyllis!

Tomorrow we awake to an early hike to the third waterfall of Ein Gedi, and a swim in its pools. By noon we will be in Arad, with more stories to tell.

Posted by Reasonable Judaism at 10:02 AM